I have always thought it strange that there are three giant forts located on tiny Key West. What was it about this two mile by four mile island that caused the government to build so many massive fortifications? On this trip, I was determined to find out. 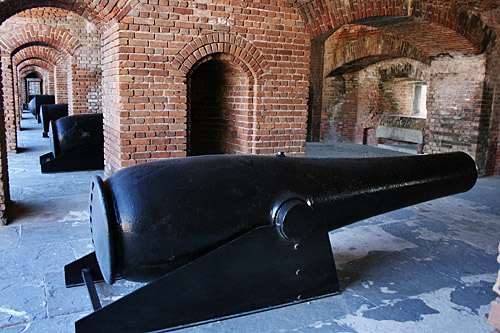 A row of monster canons at Fort Zachary Taylor 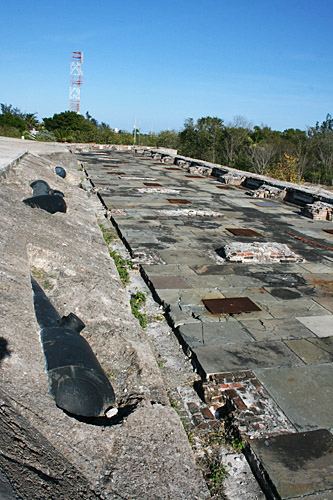 When Fort Taylor was shortened from two stories to three, obsolete canons were discovered in the concrete walls, where they had apparently been placed for structural integrity

In 1836 the U.S. government decided to build a string of nine forts along the east coast of the U.S. in order to eradicate piracy. By the time plans had been drawn and land acquired, the pirate problem had been largely solved, but officials decided to proceed anyway. Construction of the first facility, Fort Zachary Taylor, began in 1845, shortly after Florida became a state, and continued slowly throughout the 1850’s.

The installation was completed before the outbreak of the Civil War, allowing Union forces to occupy it and making Key West the only Union city in the south. Fort Taylor became headquarters for the U.S. Navy’s East Gulf Coast blockade squadron, which deterred supply ships from reaching Confederate ports in the Gulf of Mexico. The three mile range of the cannons and the exceedingly thick walls at the fort ensured that the Confederate navy would be unable to take either the fort or the island of Key West.

Recognizing the strategic location of the island, in 1866 the government began work on two additional “Martellos” – a specific type of fort with a inner tower, or citadel, and thick encompassing outer walls. Even before completion, the Martellos functioned as an early warning system for Fort Taylor. Whenever a Confederate ship was spotted, soldiers struck a large bell with a hammer, thereby alerting personnel at Fort Taylor that the enemy was approaching. 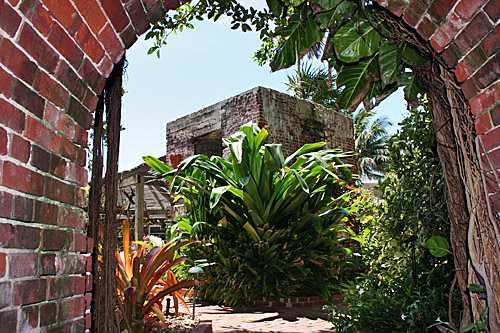 After the Civil War all three forts were used briefly during the Spanish American War, but for the most part they were abandoned and left to deteriorate until the Army released all their property in Key West to Monroe County in 1947. West Martello Tower and Fort, which had never been completed, was in such disrepair that it was scheduled for demolition. Fortunately the Key West Garden Club took an interest in the old fort and set about restoring it and planting the grounds with exotic tropical plants that today form a lush oasis in the midst of the chaos and partying that defines Key West. 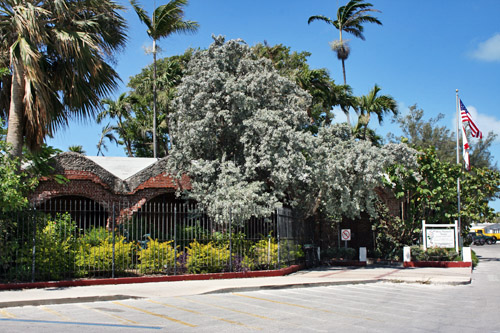 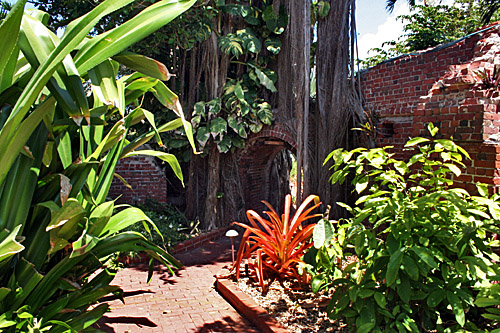 East Martello Tower and Fort, because it had been essentially completed, was chosen to house a collection of Keys artifacts, historical records, and military memorabilia. Perhaps most interesting are the displays that tell of the industries that alternately made Key West the richest city in Florida (shipwrecking, cigar making) and the poorest (sponge harvesting). The three story brick citadel in the center of the restored fort holds a collection of sculptures by local artist Stanley Papio. At East Martello, the central citadel was completed Inside East Martello, displays tell of local lore and history View from the top of the citadel in East Martello Tower

During my visits to the forts I was intrigued to learn of a fourth facility, Fort Jefferson, located on Garden Key in the Dry Tortuga islands, located nearly 70 miles west of Key West. Because of the Tortugas strategic location in the Florida Straits, construction began on this massive fourth fortress in 1846. Although Fort Jefferson was also manned by Union forces during the Civil War, it too was never completed. With the invention of the rifled canon, the fort was made obsolete and was abandoned until 1935, when President Franklin Roosevelt set aside Fort Jefferson and the surrounding waters as a national monument. The area was redesignated as Dry Tortugas National Park in 1992. Today the Dry Tortugas are just as remote as they were when Ponde de Leon discovered them in 1513. The only access is via two fast ferries that leave daily from Key West, allowing visitors a 4.5 hour stay on Garden Key. Fort Jefferson and lighthouse in the Dry Tortugas

I spent two happy afternoons exploring the three forts on Key West and intended to take the ferry to the Dry Tortugas, but strong winds during my stay meant 3-5′ seas, and I simply have no sea legs. No worries, though. It just gives me one more reason to return to Key West.