A couple of weeks ago I received an email thanking me for posting photos of the old buildings in the village of Matten, Switzerland on my blog. The message, which was from a William Diesslin, read in part:

“You didn’t know it at the time, but you photographed my great grandfather’s store front! I’ve attached the photo for your reference.”

Matten was the town I stayed in when visiting Switzerland during the summer of 2007 and I had taken scores of photos of the intriguing architecture in the village. Curious, I downloaded the photo he had attached – an historical black and white image of an old storefront. I figured it would be a simple thing to find the present day photo among those I had published on the blog and began side by side comparisons. It was not as easy as I had assumed it would be, but by comparing things like the gables, roof line, and the horizontal strip that separated the first and second stories, I was eventually able to identify the correct structure.

Today the building is home to a hostel, the Balmer’s Herberge. The building is located on the same street as my hotel and I had even eaten at the Thai restaurant that now occupies the basement. Take a look at the photos below for a glimpse into the past and an idea of how well these old buildings have withstood the test of time. Today one of the buildings comprising a large hostel, the Diesslin store hides its age well 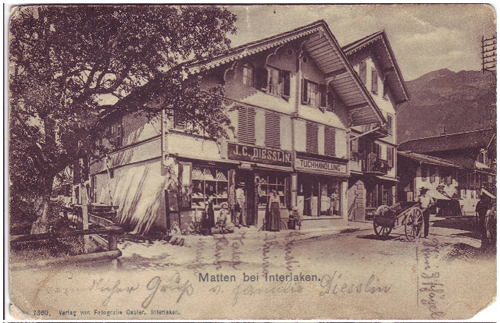 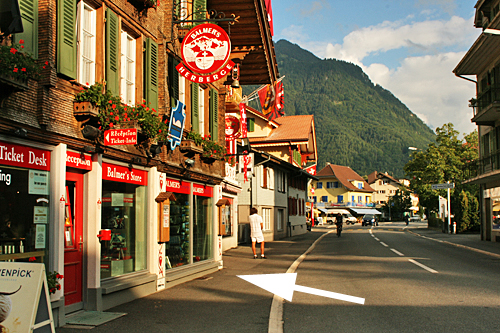 A closer look at the store from the opposite direction, as it looks today

But that’s not the end of the story. When I emailed Bill to make sure I’d identified the correct building and ask permission to use his historic photo, I received the following stunning response from him:

“You are welcome to use the photo, but I would wait a few weeks. I’ve contacted the folks at Balmer’s to see if they can confirm this with deeds. The owner is out of country but will return before February.

My grandfather emigrated from Switzerland in 1920. His wife followed him two years later. The old photograph only recently came into my possession. It was sent to a distant relative many years ago. My dad (recently) went to a Swiss Society picnic and someone showed it to him. I have since obtained quite a few family records. My grandfather’s birth certificate indicates that his father (my great grandfather) had the occupation of “handlesmann” or merchant in English. That was the start of the link. (see the word ‘handlesmann‘ in the sign shown in the historic photo).

What threw me off is that I thought the sign in the old picture said J.C. Diesslin. The birth certificate indicated that he was Johann George Diesslin. Zoom in at the picture and see for yourself. It helps if you look at the “C” and “G” in tuchhandlug. The opening at the bottom of the “C” is different from the top. We are quite sure it says J.G. Diesslin, but Balmers will hopefully confirm that for me.

The story gets better, I stayed at Balmer’s in 1988! I had no idea that it was tied to my family. There is something else I want to confirm; my grandmother had a brother and he married a Balmer! This might be something big.

This will be a landmark for my family as my dad was orphaned at 14 years old, all family history was lost. Your photos may have opened up a lost link to my ancestors.”

My jaw dropped when I read it! Imagine, my blog might have been instrumental in helping Bill trace his Swiss Family Roots. I waited patiently for the next few weeks, then two days ago, I received an update:

“Hi Barbara,
The owners of Balmers have confirmed that the picture I have is the “old Diesslin house.” They purchased it in 1988. (I am the) great grandson of J.G. Diesslin in the picture; the little boy to his right is my grandfather. Your photo log helped me connect the dots of my family tree.
Kindest regards,
Bill Diesslin”

What are the chances? Think of just some of the things that had to happen in order for Bill to make this discovery:

I could go on about the series of seemingly insignificant events that had to occur before Bill could connect his family dots. There is no doubt that we live in amazing times and that the Internet is an amazing tool, but I have to believe there was something more going on in this instance – somebody’s higher power was working overtime and I am thrilled to have been a part of it.

The Atomic Bomb Dome in Hiroshima is a must see wh

At the Oceanographic Museum of Monaco sea anemones