Most people barely give Krabi Town a second glance. If they visit at all, they stay overnight on their way to Railay Beach, Koh Lanta, or the Phi Phi Islands. But during a recent visit to Railay Beach, I decided to stop over in the town of Krabi for three days and was pleasantly surprised by what I found.

The Khao Khanap Nam mountains initially piqued my interest in Krabi Town. Located just north of the city center, the twin Karst limestone stacks stand on opposite shores of the Krabi River. They thrust some 300 feet into the air from a perfectly flat plain, as if a giant from the underworld poked his finger into the dirt above his head. The stacks lean away from one another in a gentle Yogic back bend, perhaps an attempt to flee from cycles of river flooding.

I did not tour the caves at Khao Khanap Nam (these old hips and knees no longer do well on jagged, uneven surfaces), but it is a simple matter to hire a long-tail boat at Chao Fa Pier to visit them. A 15-minute ride will take you past thick mangrove forests to the foot of the hills, where you can walk into the caves and inspect a wonderland of stalactites and stalagmites. I opted instead for a distant view of Khao Khanap Nam. As the sun set over the riverside promenade, tangled green Rasta tresses cascaded down the stacks, thirsting for water. Patches of exposed limestone shone bronze and orange in places where the braids parted. Taller, more jagged Karst formations created an extraordinary backdrop for the idyllic scene.

Typically, for me, I ignored the more touristy things to do in Krabi. I spent my two remaining days nosing around town, trying to connect with the local culture. My first surprise was the curious stoplights at intersections on Maharaj Road. Cavemen sculptures stand upon concrete columns, carrying suitcases that hold the red, yellow, and green crossing signals. As if the street light wasn’t bizarre enough, someone had placed white masks over the mouths of the cavemen, no doubt a reminder to practice COVID safety measures. Other columns hold sculptures of elephants, eagles, and an otter. The stoplights apparently pay homage to ancestors who inhabited the region up to 30,000 years ago. Pottery, stone tools, and rock art discovered in caves and on cliffs indicate these early inhabitants considered such animals to be sacred.

Further down Maharaj Road I found Wat Kaew Korawaram, perched on a hill that overlooks the city center. The imposing staircase leading to the top is lined on both sides by golden nagas (dragon serpents) that slither down the banisters. The Viharn (worship hall) occupies the center of a half-acre plaza at the top of the hill, and displays that surround it on three sides tell the story of Buddha’s life.

Half a block away I stumbled upon an old, traditional teak building that had long been home to the Wat Kaew Korawaram Museum. From the boundary stones that surround the building, it was obvious that it had once been the consecrated Ordination Hall for Wat Kaew Korawaram. Officials on site kindly let me peek through the front door. Wooden beams and carvings were piled up along the inside walls, waiting to be moved. I was disappointed that the museum had been relocated closer to downtown. A newer facility couldn’t possibly match the historic atmosphere of the old Ordination Hall. Perhaps more space was required for exhibits, but I do hope they restore the original building and put it to good use.

On my way back down to the river, I found a block-long wall that was covered with paintings depicting local culture. Beyond that was the municipal center, where government buildings surrounded the City Pillar Shrine, and a massive sculpture of a herd of elephants stood at the entrance to the complex.

On my final day in Krabi Town I decided to follow the riverfront promenade to the southernmost part of town. A brick pathway wandered through parks, children’s playgrounds, flower gardens, and sporting complexes. Families picnicked in the sunshine. Men stood in a wide circle playing Sepak Takraw, a game that requires keeping a rattan ball in the air without using one’s hands. Children tore down the pathway on tricycles. Vendors hawked everything from ice cream to full curry meals from stainless steel carts. And interspersed among it all were outdoor sculptures of every imaginable type. One featured a giant crab. Another depicted a nesting family of eagles. Some modern pieces left interpretation to the viewer.

However, Krabi saved the best for last. On the furthest southern point of the promenade, on a delightful sand spit of river beach, I found my favorite piece of art, a sculpture by Professor Emeritus Vichoke Mukdamanee, titled The Story of Love. It reminded me of the frilly paper doilies I used to cut from folded craft paper when I was a kid. It made me think of Valentine’s Day. It made me feel all warm and fuzzy inside.

Truly, there is much more to Krabi than meets the eye. The people are friendly, the prices are affordable, and for those who are willing to look, culture is everywhere. This is one Thai town that’s worth more than just an overnight stay. 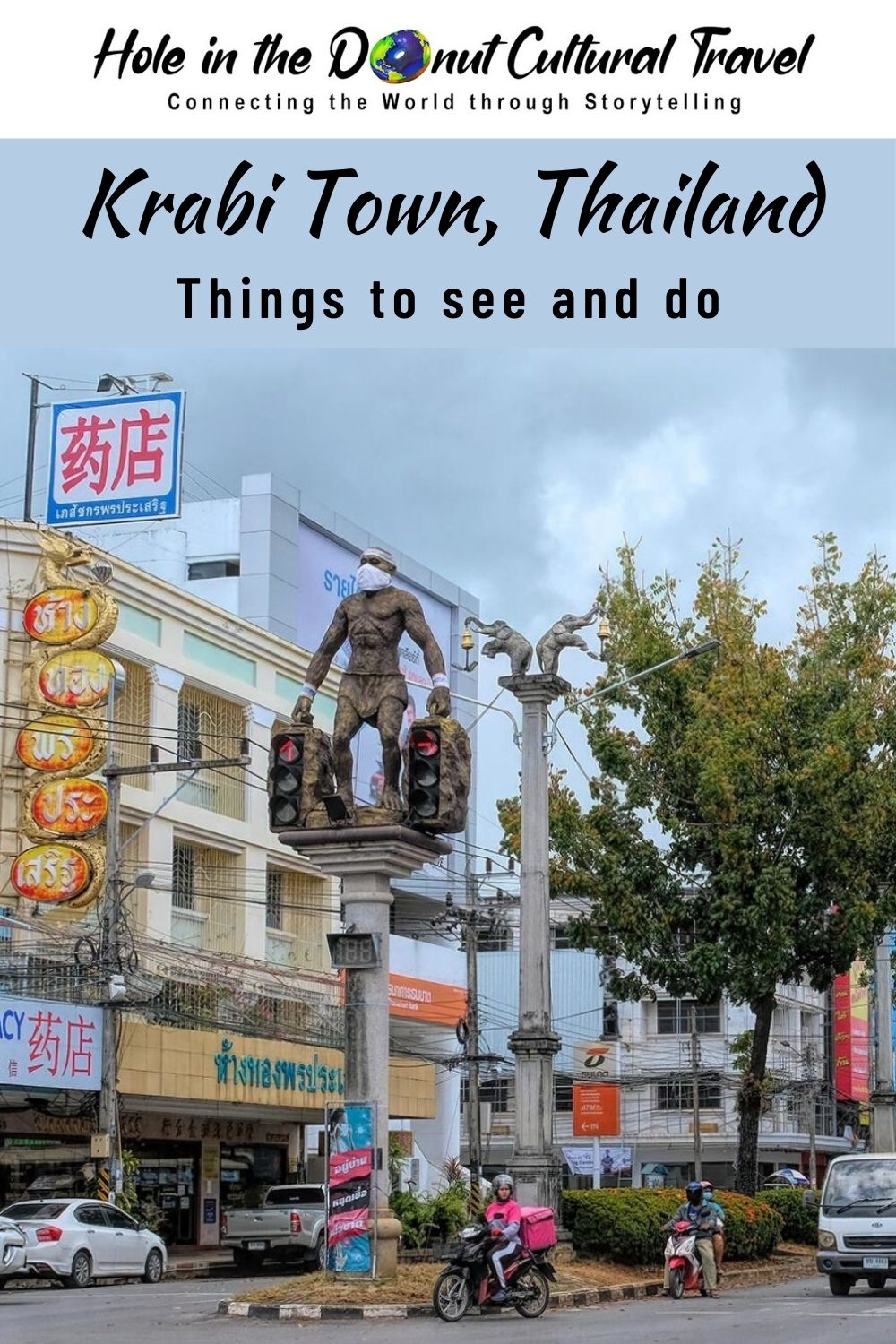 26 thoughts on “Krabi Town, Thailand – Like an Outdoor Art Gallery”