It’s not unusual for my travels to take on a theme. Past tours have found me checking out beaches, National Parks, botanical gardens, or historic landmarks. This trip became an unexpected search for North Carolina waterfalls. It started simply enough. I wanted to do some extended hiking – one of my passions in life. The first trail I chose led to Hickory Nut Falls at Chimney Rock, North Carolina, which was running spectacularly due to the recent abundant rains. Realizing that this could be a once in a lifetime opportunity, I quickly decided to focus on discovering as many waterfalls as possible during this trip.

Serendipitously, my route led me to Brevard, North Carolina, which advertises itself as the “Land of Waterfalls.” The county claims to have some 450 cataracts within its boundaries and I spent the next four days ferreting them out. Those located alongside roads were easily reached. Others required long hikes. A few could only be accessed by bushwacking a trail through the forest or climbing down rock faces. But it was worth the effort, because I captured amazing photos of spectacular waterfalls and mountain scenery.

On day one I began in the DuPont State Forest. Located in the Blue Ridge Mountains near Brevard, the site’s 10,400 acres of forest feature four major waterfalls on the Little River and several on the Grassy Creek. The original 7,600 acre forest was established in 1996 through a generous bargain sale from the DuPont Corporation. The 2,200 acre tract in the middle of the original State Forest, containing High Falls, Triple Falls, and Bridal Veil Falls was acquired by the State in 2000, after the State of North Carolina Council of State invoked its power of eminent domain. The action was taken against a real estate developer who was building a large residential housing development in the center of the State Forest. As a result, these natural wonders will be protected in perpetuity, and as an added bonus, the graveled roads cut in by the developer now serve as excellent hiking trails.

From the Hooker Falls parking lot, I took a short 1/4 mile walk on a fairly level path to Hooker Falls, then retraced my steps to cross the highway and begin the more strenuous treks to Triple Falls (0.5 mile), the foot of High Falls (0.8 mile), and then on to the top of High Falls via Covered Bridge Trail (0.22 mile). All are one-way distances.

In addition to seeing North Carolina waterfalls at their best, I was fortunate to arrive when the Mountain Laurel was in bloom. Giant bushes heavy with blooms bordered the trails, their snowball-shaped blossoms ranging from the palest pink to a deeper rose.

My initial view of Triple Falls was from above. A massive volume of water roared down the mountainside, forming three major falls at this particular point in the river. A bit further along the trail I descended to the foot of the third cascade via a staircase and picked my way over water-smoothed granite boulders to the rushing river. I stood just inches from the third waterfall; the torrent thundered past, obliterating all other sound and shaking the solid rock beneath my feet.

Smooth rocks bordering the river allowed me to easily climb up to the second level, which was not as precipitous a drop as the lower cascade. Even so, giant logs had been scoured and tossed up on shore. Some foolhardy teens were swimming in the frothy pool at the base of these falls. I held my breath as one young man got caught by the current and was nearly swept down the mountainside. Fortunately, at his closest approach to the falls, the whitewater pushed him back toward the edge of the river and he was able to clamber out onto dry rocks.

Mesmerized by the beauty and immense power of Triple Falls, I sat cross-legged on a sun-baked boulder and watched the river rush by for the better part of an hour. I could have stayed there all day, but there were more waterfalls to see. Thunderheads were beginning to gather as I trekked toward High Falls, so I quickened my pace, hoping to make it to the covered bridge at the top of the falls before the rain. Luck was with me. Skies were gray when I arrived at the bridge, but broke up on my way back down the mountain, providing me with a stunning view of High Falls framed by ominous black clouds. Satisfied, I scurried back down the mountain to the parking lot; the first fat drops falling as I drove away. The trails in DuPont Forest provide access to six waterfalls, as well as numerous mountaintops, lakes, and rivers.

On day two I drove north on U.S. Route 276 from Brevard into the Pisgah National Forest. My first stop was Looking Glass Falls, located just a few feet from the highway and accessed via a stone stairway built into the cliff. At the bottom, visitors climbed out on boulders and sat quietly, awed by the thundering cascade pouring off the cliff and sparkling rainbows dancing off the churning water. A few hardy souls (mostly kids) were swimming in the icy pool at the foot of the falls, keeping a respectable distance from treacherous currents.

Just a short distance up the road was the pull-off for Moore Cove Falls. This waterfall required a 1.4 mile round trip hike on a moderately difficult trail that was rocky in places and muddy in others. It was well worth the effort to see this 50-foot waterfall, tucked into a verdant patch of forest that glittered like emeralds in the late afternoon sunlight.

Next came Sliding Rock, an outcropping of granite that protrudes from the mountain like the gently sloping brow of a sleeping giant. Worn smooth by eons of rushing creek water, Sliding Rock is an enormous water slide popular with kids. Grasping a metal railing installed on one side of the dome, they make their way to the top of the slippery rock and ride the whitewater to the bottom, squealing in delight all the way down. Sliding Rock is also easily accessed by an improved pathway. Restrooms and changing rooms are available on site, and there is a $1.00 per person entrance fee.

For the final stop of the day I backtracked to Forest Service Road 475 and drove 1.5 miles to the gravel road intersection just beyond the State Fish Hatchery (FS 475B). Slightly more than a mile later I found a small pull-off on the right and a trail head that led a short distance up the mountain through deeply peaceful forest. I topped a final rise and followed the curving trail into a hidden cove, where an exquisite ribbon waterfall spilled over a high rock outcropping. This was Slick Rock Falls. Although I knew the road was just below, it  felt as if I’d magically stepped into a secluded Shangri-La. Water fell gently on the rocks and burbled in the stream below, birds chirped, and the late afternoon sun illuminated everything in a golden glow. A perfect ending to a perfect day.

Although I though it unlikely I would find scenery more beautiful than I had already seen, on day three I drove north on State Route 215 and turned right on Macedonia Church Road, in search of Lemon Falls. My directory said it was located very close to the road, but also advised “you may have to search for a path through the Rhododendron.” Guided by the sounds of falling water, I pulled over onto a grassy strip on the left side of the road, exactly 0.6 miles after turning onto Macedonia Church Road. The falls were slightly visible through the forest, but there was no discernible path. Finally discovering a slight opening, I pushed through the dense brush and, using tree roots and overhanging branches, shimmied down the cliff to the foot of the falls. The climb back up left me scraped and muddy, but the photos I took were spectacular and justified the trouble.

Back to SR 215, I turned left and headed up the mountain another 7.8 miles to the Living Waters Ministry Church, pulling over near the rock pile that marks the parking area on the side of the road. A small path led down the bank to a wider trail that branched left and right and followed French Broad River. To the right the path led to twin cataracts: French Broad Falls on the main river and Mill Shoals Falls, which tumbles over jumbled rocks next to an old mill.

Returning to my entry point, I followed the trail downstream toward Bird Rock Falls. The river descended rapidly in this direction, creating dozens of smaller cataracts along the way. Wherever possible, I scrambled down the bank to take photographs. At the end of the trail I ducked through Rhododendron and Laurel to get back to the river and found myself in a sheer-walled canyon of black-streaked rock. Straight ahead, a pencil-thin rivulet wove down the immense rock face; to my right to the long expanse of Bird Rock Falls rushed down the smooth granite river bed. I sat on a sun-warmed flat rock, drinking in the beauty, awed by the magnificence of Mother Nature. These lands are owned by the Ministry, which graciously maintain the trails and encourages free public use.

Still not satiated, I continued up the mountain, destined for the Summey Cove trailhead. This four-mile round trip trail, rated “more difficult” because it requires a fairly steep climb up a mountain, leads to Courthouse Falls, which falls 45 feet to a large pool in a picturesque cove. A group of young daredevils were jumping off the high cliffs into the pool; these same young men told me I could have driven down FS 140 and walked 1/3 mile to the falls, rather than making the four-mile trek. Groan. Oh well, at least I got my daily exercise.

It was early evening by the time I made it back to my car, but I still had one more North Carolina waterfall on my list before I headed out of the State. At Lake Toxaway I pulled off into the parking lot of a restaurant perched on the cliff next to Toxaway Falls, a spillway for the dam that created the lake. Plodding to the bottom of an access road, I snapped a couple of quick photos, too tired to really care how they turned out, and then retired to the restaurant for a well-deserved feast.

Tomorrow I will be in northeast Georgia, where I will visit a few more waterfalls, but the title “Land of Waterfalls” belongs to North Carolina, hands down. 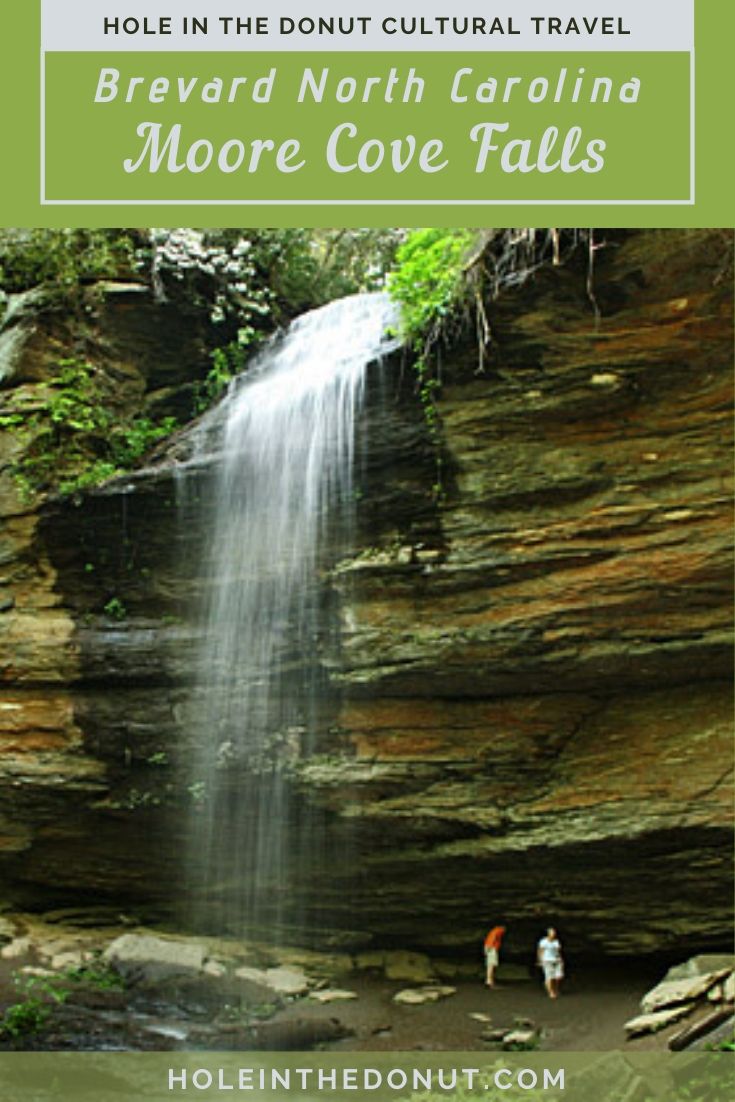